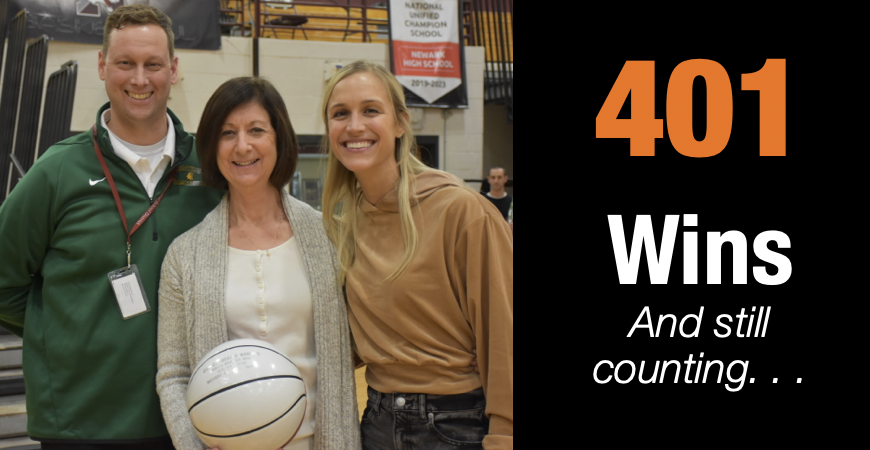 To view the designed article with photos and text: https://5il.co/1nkah

Diane Kirnie has never been comfortable in the limelight which is unfortunate because she’s been in it a lot during her phenomenal 27 years of coaching the Newark High School Varsity Lady Reds basketball team.

So it’s no surprise that after reaching another HUGE milestone the 400th win of her coaching career January 13th in a 65-43 victory over Penn Yan and being recognized for her amazing achievement before the start of the home game Jan. 18th at NHS with Wayne Central that Newark won 42-33, adding another win to her total that she humbly reiterated “I’m not one that likes attention drawn to myself.”

However the former Kelley School physical education teacher, who retired from that job in 2016, quietly said she is proud of her latest accomplishment.

“It’s been nice and nice for the kids to be a part of it. They’ve worked hard. The best part of this is that I’ve heard from a lot of former players on Facebook and other social media. That’s been very rewarding.”

One of them is former NHS superstar player Alyssa Fenyn who Kirnie coached. In 2009 the year the Lady Reds won the NYS Championship and Fenyn was the NYS Player of the Year in Class A the NHS senior won a full athletic scholarship to Virginia Tech where she played Division 1 basketball from 2009-2013 and then played professionally in Slovakia for one season.

Co-owner of smoothFIT Training in Victor, Fenyn, on her Facebook page Jan. 14th encouraged
former NHS teammates and others Kirnie has coached to come out and support Coach Kirnie on such a “huge milestone that speaks volumes to her as a coach.”

Newark Central School District Director of Health, Physical Education and Athletics Jonathan Mastin invited Fenyn to say a few words about Kirnie at the recognition. Here’s what she said:

“I am honored to be able to speak on behalf of all players who had a part in this major milestone. I know if they had the opportunity to be here every single one of Coach’s past players would be here tonight because that’s the kind of impact she’s had on so many of us."

I posted on Facebook about Coach winning her 400th career game and the amount of past players who commented on how much she has impacted their life both on and off the court and how they still consider her one of their greatest mentors and coaches of all time is proof of her greatness, and speaks much louder than the 400 wins. . . “I can tell you first hand, I attribute a lot of my success in my basketball career and now in life, to the high standards and work ethic Coach held me to."

“All the success this program has had, and the deep-rooted tradition we pride ourselves on here at Newark can be seen on these banners. But as players cycle through this program, there has always been one common denominator in all the wins… and that’s Coach Kirnie."

“She has put Newark on the map and as we like to call it the GOAT _ greatest of all time.”
After Fenyn spoke, Mastin presented Kirnie with a commemorative basketball marking her 400th win

“Kirnie guided Newark from 1986-2012, then returned in the 2021-22 season. During her first stint, she collected 387 victories, more than any other female basketball head coach in the history of Section V. The pinnacle of her career at Newark was when the team captured the 2009 New York State Class A Championship. She was also named New York State Class A Coach of the Year in 2009 and previously was the All-Greater Rochester Coach of the Year in 2007. During her first run with the Reds, she won eight Finger Lakes East League titles and was honored as the League’s Coach of the Year eight times. She is one of only a handful of coaches to win three sectional crowns after capturing sectional titles in 2002, 2007 and 2009. Two of those sectional championship teams ended up in the NYS Final Four.”

Mastin is thrilled about Kirnie’s accomplishments.

“Diane is currently 9th in Section V history with 401 wins and is the 2nd female coach in Section V to reach 400 wins. She is a great coach and a great person. She has meant so much to so many in the Newark community throughout her tenure as teacher and coach and I feel incredibly fortunate to have had the opportunity to be a small part of this historic moment. Diane's passion and love for the game of basketball may only be matched by her passion and love for her family and her players. I am happy for the players on this year's team, that they were able to be a part of history. I am grateful to Penn Yan and Coach Cooper for their willingness to move the game to Newark so that her husband, Bill (JV Girls Basketball Coach) and son, Thomas, an NHS junior, could both be in attendance for the 400th win. I very much appreciate former players like Alyssa being in the gym to celebrate the moment with Diane. It has been so much fun, and I could not be happier for her. Congratulations Coach!”

NHS Principal Kelly A. Zielke is also delighted about Kirnie achievements. “We could not be more excited for Coach Kirnie for reaching such an amazing accomplishment. Her dedication to this sport and to this team is unmatched, and the Lady Reds are honored to play for her. The athletes learn a strong work ethic and team commitment from Coach Kirnie that will empower them far beyond their basketball seasons and into their lives. Congratulations Coach!