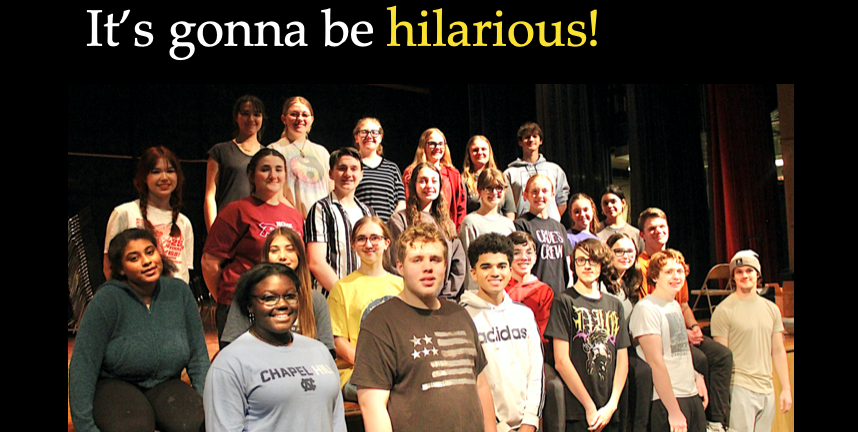 To view the designed article with photos and text visit: https://5il.co/1ni8m

Newark Drama Club’s rehearsals are well underway for the March presentation of the musical “The Wedding Singer.”

The show takes the audience on a nostalgic trip back to the mid-80s when hair was big, greed was good, collars were up and a wedding singer might just be the coolest guy in the room. Based on the hit Adam Sandler movie, “The Wedding Singer’s” fun songs and dances are a hit throughout the show.

Set in 1985, rock star wannabe Robbie Hart is New Jersey's favorite wedding singer. He's the life of the party until his fiancée leaves him at the altar. Heartbroken Robbie copes by trying to make every wedding as disastrous as his own. Until Julia, a winsome waitress enters the picture and wins his affection. One BIG problem is that Julia is engaged and about to be married to a Wall Street shark, and, unless Robbie can pull off the performance of a decade, the girl of his dreams will be gone forever.

Director Emily Howard, an NHS English 11 teacher, said she chose this musical production because “It's fun!”

“We needed a show that will allow our students the opportunity to be silly on stage. This show features a wide range of characters and a large ensemble. After a more traditional show last year, we wanted to mix it up so that students experience new musical theatre too. Plus, we have a bunch of 80's prom/bridesmaid dresses in costume storage that we've been waiting to use!”

As in the past, Howard is choreographing the show. NHS Vocal Music teacher Kate Flock is the musical director and Newark Middle School Instrumental Music teacher Rebekah Valerio will be the Pit Band conductor.

Tickets at the door will be $5 for students and senior citizens and $7 for adults.