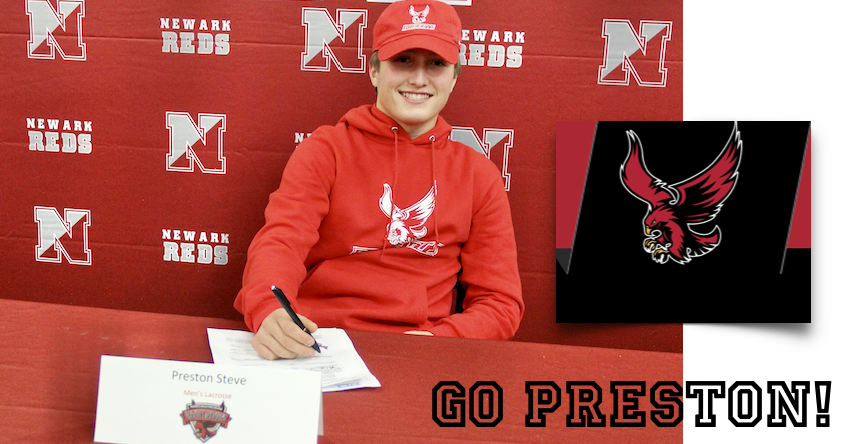 In addition, he has received an academic scholarship. Both are for his freshman year and will be renewed annually as Steve meets their rigorous criteria.

The son of Brad and Deanna Steve who wants to pursue a career working in Homeland Security and whose current GPA is 94.13 and who has been playing lacrosse since he was in 7th grade, Preston Steve is thrilled about the prospect of attending RWU and playing lacrosse with the Redhawks under Head Coach Rocky Delfino.

“Approaching this next chapter in my life, Roberts Wesleyan made me feel at home and like I belong there. Coach Delfino welcomed me, as well as the team, and I can’t wait spend the next four years representing the Redhawks,” he said after the 5 p.m. signing event in the NHS library and the pizza and cookies reception that followed.

• Preston was 1st team All-League attack in 2022
• All-Greater Rochester Honorable mention in 2022
• All-State Honorable mention in 2022
• Preston broke the school record for points in a season with 80 points this past season
• “He is on track to break records for assists in a career, goals in his career and overall points in a career.”
• “He has been with me since I had my first open gym in Newark and he hasn’t missed anything lacrosse related in two years. He is a great kid and a great teammate.”
• “He is a two-time team captain and the leader of our team.

He may not be the biggest guy on the field but he has the biggest heart. I’ve coached for 8 seasons and he is by far the hardest working individual I’ve ever had. He has earned everything he gets through hard work and dedication. Ever since I stepped foot on the Newark campus he has been all in and the hardest worker. I believe he is just scratching the surface as a player and hasn’t even come close to reaching his potential. He’s a great young man and I’m very proud of him and can’t wait to see his hard work keep paying off for him.”

“We are incredibly proud of all that Preston has accomplished on the field and in the classroom. He has embraced and epitomized the term student athlete and served is a great example for what is possible with hard work, focus and dedication. We will miss his competitive spirit and leadership, but are excited for him and his family as he moves on to the next chapter of his life.
Good luck, Preston. Go Reds!,” Jonathan Mastin, Director of Physical Education, Health and Athletics said.

“We are so excited for Preston for this next journey. This is a result of his hard work on the field and in the classroom and we couldn’t be more proud. Although he’ll be a Redhawk, he’ll always be a Red! Congratulations to Preston and his family. We wish him the very best and know that with his commitment and work ethic, he will do great things,’’ said NHS Principal Kelly A. Zielke

“Preston’s combined academic and athletic skills have led to him being highly-successful at NHS and I believe will translate into him being highlysuccessful at Roberts Wesleyan University,’’ said Superintendent Susan Hasenauer. “I look forward to following his career as both an athlete and an active and contributing student at RWU.”

Steve’s parents later expressed how proud they are of their son’s achievement.

“I’m proud of all my son has accomplished and these scholarships are well deserved with the amount of work and sacrifice he has put forth with academics and lacrosse. He’s a true student athlete,’’ said Brad Steve, who is President of the Newark Board of Education.

Deanna Steve echoed her husband’s sentiments. “Preston has always worked hard both in the classroom and on the field. I feel that the acknowledgment of his dedication, through these scholarships, shows him that it was all worth it. We couldn’t be more proud!”