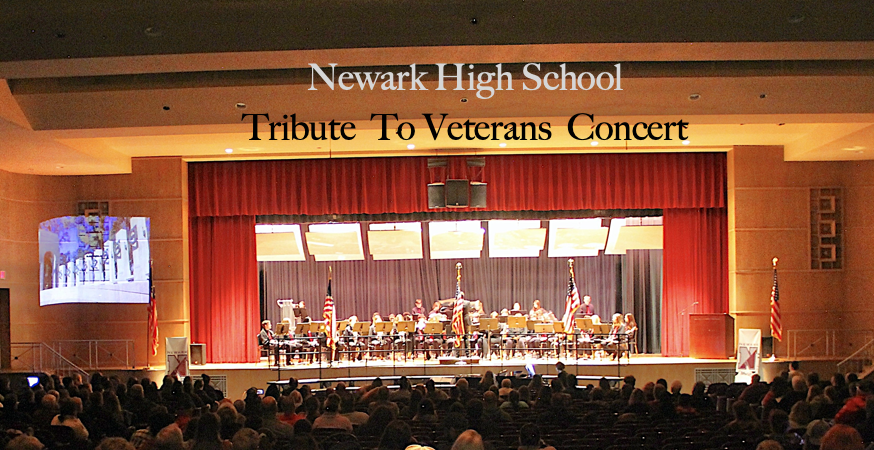 A wonderfully-inspirational evening concert salute to area Veterans November 10th was held at Newark High School and attended by about 250 people.

Between the various selections, Humphrey and Flock read inspirational quotes about the cost of freedom and more.

“No soldiers choose to die. It's what they risk being who and where they are. It's what they dare while saving someone else whose life means suddenly as much to them as theirs. Or more. To honor them, why speak of duty or the will of governments? Think first of love each time you tell their story. It gives their sacrifice a name and takes from war its glory.’’ - Dr. Samuel J. Hazo

The above poem, written by Poet Dr. Samuel J. Hazo, was read by Retired U.S. Navy Chief Petty Officer Anthony Fluke while the NHS Wind Ensemble performed a composition written by Hazo’s son, Samuel R. Hazo entitled “Each Time You Tell Their Story.” Fluke, whose daughter Cheyenne, a NHS senior, who plays clarinet in the Wind Ensemble, retired three years ago after serving 23 years in the Navy.

During the selection nearly at the end of the concert, the various service branches’ songs were played during “Armed Forces: The Pride of America!” and Veterans were asked to stand and be recognized when their song was played.

After the concert, Veterans and their guests attended a reception in the Band Room put on by the Newark Music Boosters.

While the Veterans Tribute Concert was not held at NHS in 2020 and 2021 due to COVID restrictions, Humphrey said he and Flock were delighted to bring it back again this year. “The musical performances were outstanding and the kids want to keep this going. We will because we want this to become an enduring tradition at Newark High School. It was a heartwarming night which allowed the kids the chance to give back to their community,” he said.

In the concert program, Humphrey and Flock thanked Veterans with these heartfelt words:

"With respect, honor and gratitude, thank you, veterans!"

“Let every nation know, whether it wishes us well or ill, that we shall pay any price, bear any burden, meet any hardship, support any friend, oppose any foe to assure the survival and the success of liberty.” - John F. Kennedy