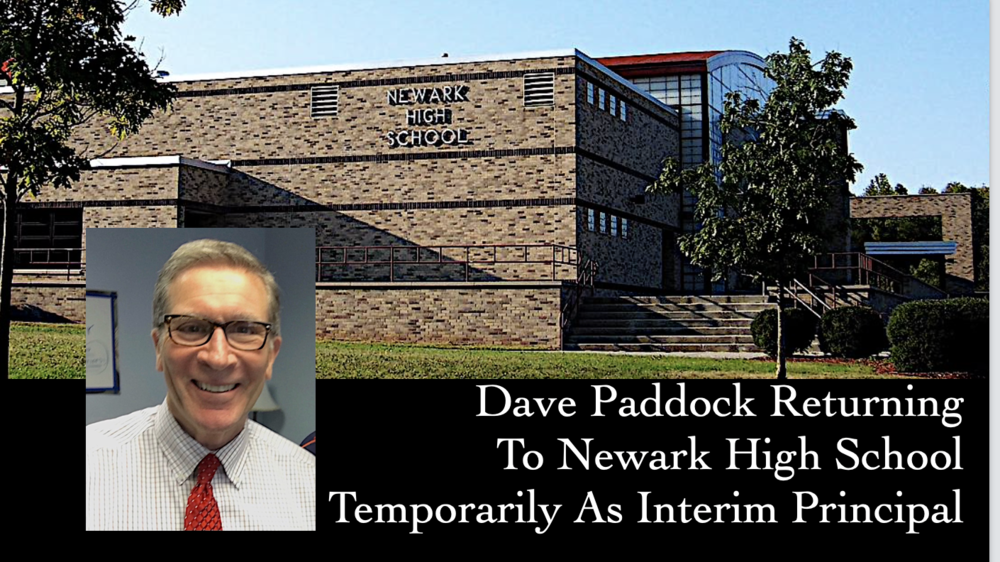 “We are very pleased to have someone with the breadth of Dave Paddock’s exemplary experience not only while here at NHS, but 13 years afterward as Principal of Fairport High School and as an administrative mentor since 2008 come onboard and serve as Interim Principal at NHS while we are searching for just the right individual to become the new Principal of Newark High School,” said Superintendent Susan Hasenauer.

When Ganster announced September 8th, he would be leaving NHS, Hasenauer put out this statement: “While the Newark Central School District is disappointed to see him go, we are also happy for him as he begins his journey as Superintendent. Nick did a tremendous job providing leadership, direction and instruction within the school. He developed and maintained effective educational programs and promoted the improvement of teaching and learning with each individual child’s needs at the forefront of every decision. On behalf of the District, we wish Mr. Ganster nothing but the best in his new endeavor.”

“I am thrilled to be returning to Newark High School as the Interim Principal,” Paddock said. “I have so many great memories from my time in Newark in the early nineties and it’s a school and community that means so much to me. Great kids and families, amazing faculty and staff and a supportive community defines the entire Newark School District, so I can’t wait to get started!”

Paddock graduated from Springfield College with a Bachelor’s Degree in Physical Education; earned a Master’s Equivalent from Elmira College and the College of St. Rose; and his certificate of advanced study in educational administration from SUNY Cortland.

• Newark Central School District Educator of the Year in 1994

• New York State Secondary School Principal of the Year in 2006

• Paul Harris Fellowship Award from the Fairport Rotary Club in 2008