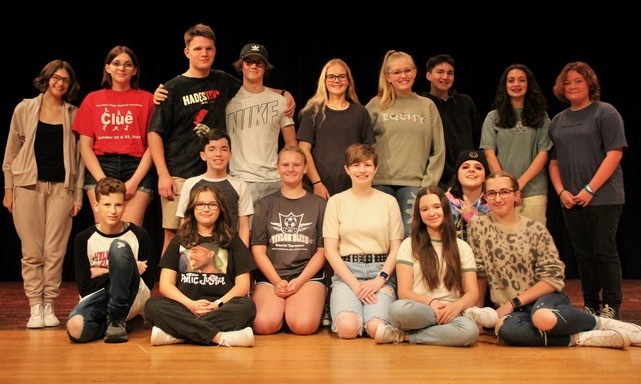 Link to article - Text Below:

Rehearsals are underway for the unique and thought-provoking fall play "8 Minutes Left" that will be presented at Newark High School October 21-22.

Rehearsals are underway for the unique and thought-provoking fall play "8 Minutes Left" that will be presented at Newark High School October 21-22. Director Emily Howard said the play, that does skillfully employ humor, takes a look at what it would be like if the world was coming to an end in 8 minutes and how humans might deal with that stark reality.

It spotlights the final moments of life for some New Jersey residents including a well-prepared-for-an emergency couple with a backyard bunker they’re not sure how to get into; two elderly frenemies who spend their precious few moments left squabbling over their favorite park bench; and a mother watching her children play and wondering what their lives would have become.

"I think the question of how humans would spend their last minutes on earth is interesting. It is a theme that has been explored often in fiction and I think it will lead to some great discussions in the rehearsal room,” Howard said.

“This is a vignette-style show which features 1, 2, or 3-person scenes that gives many actors an opportunity to perform. It also allows us lots of time in rehearsal to focus on some foundational skills. Actors will be building relationships with their scene partner, learning about stage pictures and blocking and concentrating on the meaning behind the dialogue and physical movements in each of their scenes.

“The 20-person cast features actors in 9-12th grades. I selected this piece of theatre because of its flexible casting opportunities. Nine of our 26 cast and crew members are also balancing a fall sport with the rehearsal schedule. It's important to allow our students the chance to participate in everything that high school has to offer .We currently have 6 members on the crew. As always, the Newark Drama Club productions are focused on developing the actors and technicians. I hope that some of the cast and crew members will also want to take on design work _ sets, costumes, lights, sound and publicity.”

“8 Minutes Left” will be presented in the NHS auditorium Oct. 21st and 22nd at 7 p.m.. Tickets at the door will be $5 for students and seniors and $7 for adults. What if? Front